Komodo Island is known throughout the world for its famous dragons, the Varanus Komodoensis, but not so much for its marine biodiversity. This small island in Indonesia of just 2,000 inhabitants is part of the national park that takes its name and has one of the richest nutrient waters the world. Formed by 200,000 sq miles of marine reserve, it receives two streams rich in nutrients, Pacific Ocean stream that mixes with the warm waters of the Indian Ocean to create a paradise for pelagic species look for food in abundance. This streams and its privileged location in the middle of the Coral Triangle, provides that extraordinary biodiversity that has given the category, since 1991, of World Heritage by UNESCO.

The Komodo National Park is made up of three large islands: Komodo, Rinca and Padar which, together with 26 others, were declared a nature reserve in the 1980s with the aim of defending the famous Komodo dragons and later declared a World Heritage Site to protect its healthy and spectacular coral gardens full of colorful life.

Diving in Komodo can only be done through liveaboards, which allow you to access healthy reefs to dive in a macro photography paradise very much appreciated by marine biologists and nature lovers. On this island, included among the 7 natural wonders of the world in 2011, you can find one of the most professional dive networks in the world, where you can even find luxury boats made in a traditional Indonesian way, specially equipped for underwater photographers and where you will have some of the best dives of your life.

It is one of the best diving destinations in Indonesia, but not recommended for Open Water Divers as it has strong currents due to the mixture of waters of different oceans, and can have cold waters in the south of the National Park, but there is no doubt that it is one of the most interesting dives places in Indonesia where you can dive during the whole year.

The overall tone in Komodo is the great color and contrast of rocks and black volcanic sand with huge gorgonians and coral colonies full of light. During your diving trip to Komodo you will also get the contrast of diving with to large pelagic species such as manta rays with the smallest and most enigmatic species such as the blue ring octopus or the bizarre colors of numerous invertebrates. Komodo has many things to offer in just one week of dive trip: top world muck diving, thrilling drift diving in which you will need the reef hook, walls that get lost in the blue, visibility of up to 30 meters, caves, unique night dives full of life… ah, and the dragons, almost forgot. You will also see dragons

«Batu Bolong» is located in the north of Komodo and is considered one of the best diving spots in Komodo both for its profusion of life and for the quality of its coral gardens. Hard corals and sponges cover the walls of this pinnacle where humphead wrasse and whitetip sharks come to feed and where thousands of small reef fish fight for space and food. Hawksbill turtles, sweet lips fish, listed surgeonfish, grey sharks… If the current is not too strong it will be a dive not to ever forget.

«Castle Rock» and «Crystal Rock» are two of the most popular dive sites in Komodo. Very clear waters of great visibility with soft coral gardens of extraordinary beauty. In this two spots, where the current can also be strong, is where the coral gardens amazed me more. They were seasoned with beautiful reef fish, batfish, blacktip sharks, large banks of groupers, fusiliers or tuna. Truly amazing diving spots!

«Cannibal Rock» gets its name from the great dragons of the coast that live in the island besides this spot. The most interesting thing of this spot is its muck diving and macro opportunities. You can find all kinds of huge frog fish, nudibranchs, pygmy seahorses, green turtles, rhinopias (if you are lucky enough), clownfish dancing in their anemones and a sea bed plagued by spectacular sea apples (Pseudocolochirus Violaceus).

One of the most surprising dives because of its orography is «Hot Rocks». This area, crowned by the Gunung Api volcano, gives the seabed a spectacular contrast of colors. Black rocks covered in colorful corals, both soft and hard, give a halo to this dive that would worth it just to see the geographical environment. Hot Rocks is a festival of soft fluorescent coral together with gorgonians of intense red tones. You’ll find interesting also the bubbles coming from the seabed, leaving this young volcano still alive. Do not forget to touch the hot sea bed!

«Manta Alley» is located on the south coast of the island of Komodo and, as its name suggests, it is a manta ray diving location. As in other areas of Indonesia such as Bali, the manta rays are attracted to this area of ​​Asia by the currents, fully loaded with plankton. We dove there with up to 15 of these majestic, very curious, peaceful animals in a very intimate an unforgettable experience. Manta Alley is an area of ​​shallow but strong currents where you can also dive with reef sharks, large parrot fish or barracudas, dancing on a stage laden with coral. Undoubtedly a not to be missed dive in Komodo.

«Sangaung Island» is a volcanic island with a black lava bottom that has an extraordinary visibility, probably the best of all Komodo. It has amazing vertical walls full of gorgonians and large colonies of corals and sponges where large and spectacular nudibranchs, frogfish and seahorses live. A spectacular color contrast muck diving dive site!

Muck diving lovers would also appreciate «Horseshoe Bay», a surprising dive spot because of the large number of frogfish of a thousand shapes and sizes you will find. There you can spot the incredible mimic octopus, flamboyant cuttlefish, ghost pipe fish or spectacular seahorses colonies. Although the visibility is not good, it is worth it because of the great opportunity for macro that it offers.

«End of the world» is a 40-meter vertical wall decorated with coral and small caves patrolled by reef sharks, rays and many moray eels of different species & sizes. The spectacular black sand bottom is constantly removed by rays searching for mollusks and vertebrates.

The best dive site northeast of Komodo is «GPS Point», where pelagics have a special role. Barracudas of extraordinary sizes, hammerhead sharks (if you are very lucky) or tuna, make up a show like nowhere else in Komodo. You will also find colorful invertebrates wandering in dense fields of staghorn coral gardens brimming with anthias, humphead wrasse, batfish, grey and nurse sharks or large snappers.

«Yellow Wall of Texas» is a wall that runs along the east coast of Nusa Kode, south of the island of Rinca. Its shallow waters are laden with colorful reef species like butterfly fish, clownfish or clown triggerfish are some of the attractions of this area along with reef sharks or green turtles.

Komodo is one of this places where you have to dive before you die, a unique place in the world that combines the best macro with some mesmerizing pelagic creatures. A must dive destination for any ocean lover. 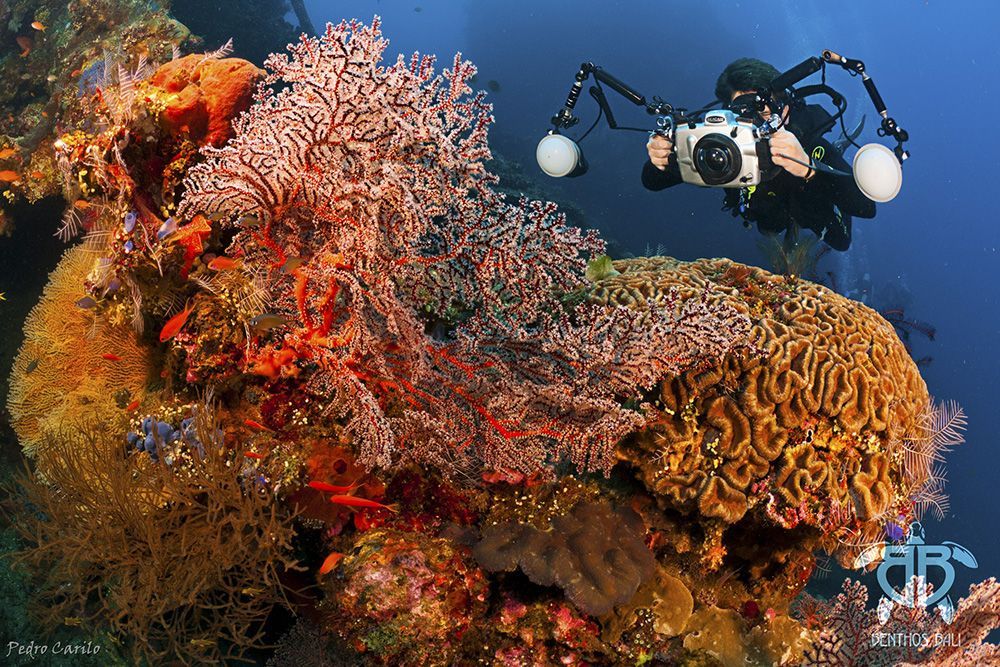